Bigg Boss Malayalam 2- Vote Results – Pradeep and Daya are safe- Reshma is in Danger| Who Will Get Eliminated?

The first elimination of the season 2 of Bigg Boss Malayalam happened this week and Rajini Chandy was evicted. Reshma Rajan was the second one to get eliminated. Meantime, Somdas had to exit due to illness. Followed by this, Thesni Khan was the last contestant to be eliminated.

As Bigg Boss Malayalam 2 has entered a crucial phase of third elimination, the fifth elimination this week will be fascinating. The audience is looking forward to a lot of action, drama, and suspense when Mohanlal, the host will dig into the happening of this week. However, the nomination has been announced it is not quite evident who will be evicted this week. 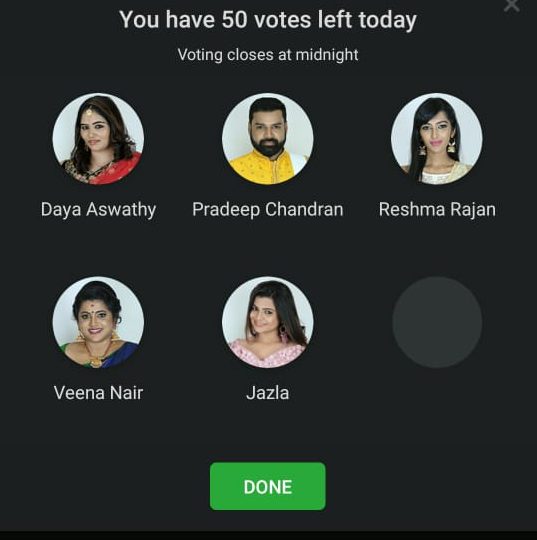 Veena and Daya are on the top of the voting polls. Pradeep and Jazla are in danger as of the votes of day 4. Trends are swinging each day and will continue to do so according to the performances in the upcoming weeks. As of now, Reshma’s vote share is not as much as those contestants at the bottom of the voting poll.

Reshma, Jazla and Daya Fight in House As Well As in nominations

It is pretty evident that Reshma and Daya are not getting along well. Both of them clearly understand that they will be in the bottom and therefore trying their level best to give content to the show and save themselves from the eliminations this week.

Wildcard entries are facing the consequences too. Due to these entries, Daya and Jazla are nominated for the first time for the elimination this week. There was a new and interesting surprise revealed by the host of the Bigg Boss Malayalam 2 house that two wildcard entries, RJ Sooraj and Pavan Gino Mathew will come in the house.

Veena and Jazla will use the power card for safety?

It was concluded in starting of this week that Arya, Raghu, Jazla, Majnu, and Veena are the top 5 in the task. They won a power card which could save them from eliminations. It would be interesting to know if Veena and Jazla will use it to save them from the elimination this week or not.

Veena has been in many nominations this season so far. As we all know Veena is in danger as no contestant except Rajith is safe this week. Wildcard entries are calling her ‘Kulasthree’. Though Veena did not take this disrespect. Although, Veena was accused of making an issue out of this by Thesni. Is Veena doing all this for the limelight?