Bigg Boss Malayalam 2 Vote Elimination Week 5- Who Will Get Evicted This Week?

Out of all the episodes of Bigg Boss, the weekend (Saturday and Sunday) Episodes are most stirring which are presented by Mohanlal. The usual pattern of these episodes is that the name of the contestant who gets evicted is announced. Sometimes the name is announced on Sunday other times on Saturday.

This happened last week when Mohanlal announced the eviction on Saturday. Who is going to be evicted this week? The answer to the question was given by the host of Bigg Boss Malayalam 2, Mohanlal, in a Sunday episode for which the Bigg Boss audience and contestants were enthusiastically waiting for. 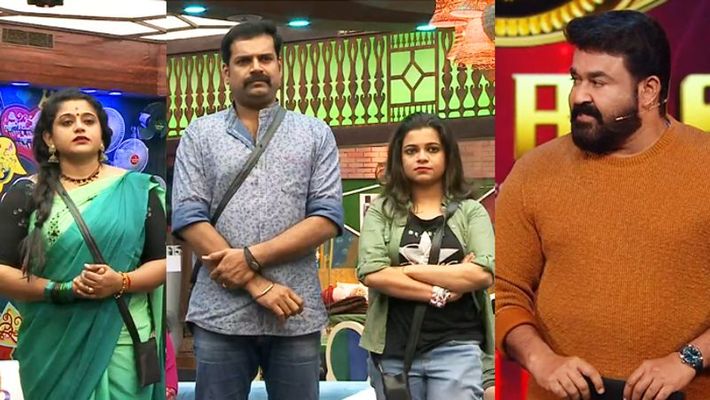 Five members of Bigg Boss Malayalam 2 house were nominated for the elimination this week. Namely, Reshma, Veena Nair, Pradeep Chandran, Jasla Madassery, and Daya Aswathy. Previously it was announced by the host, Mohanlal that Daya Aswathy is safe this week. It was also shared by Mohanlal that how sad it is that he received the maximum number of votes by the audience this week. Reshma got evicted this week due to tears. The announcement was made by the Mohanlal when three other members on the elimination list were asked to stand up.

Pradeep Chandran, Veena Nair, and Jasla were asked by Mohanlal that who would be the saddest if they left. Pradeep Chandran was the only one to raise his hand. Pradeep shared how disappointed he was when it was asked that why didn’t he wait for his arrival. Mohanlal also asked Jasla and Veena that why aren’t they sad. Jasla replied that if she gets evicted she would be happy to leave While Veena Nair replied that she would continue with her sensitive behavior and it will be difficult for her as she has explained earlier.

No Eviction This Week?

After Mohanlal asked Veena and others to sit down with Pradeep he shared the surprise this week. Information that there will be no elimination this week. The message from Bigg Boss was delivered by Mohanlal written in highlighted words. It had ‘No Eviction’ written on it. The Contestants of Bigg Boss house greeted this information by Mohanlal with a big round of applause. The main reason for this was that five contestants of the show already left the house due to eye infection. But there is a chance that there might be a double eviction this week.