A man named Oliver Peterson went viral for making watermelon pizza. This Recipe video went viral on TikTok with over 3.5 million views in June. He did not even think that Australian Dominos will make respond to that recipe. 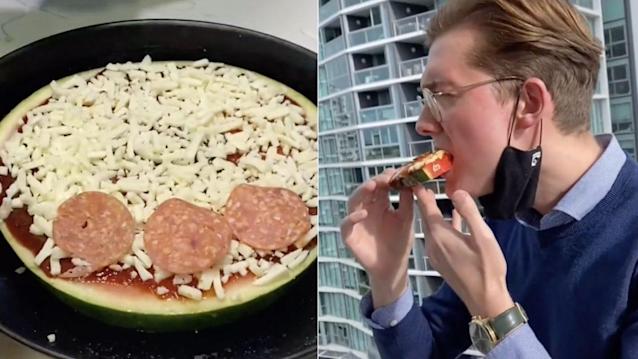 Australian Dominos says that the meal  “might be an acquired taste”. That’s why they have added their creativity to Oliver’s recipe. They have added tomato sauce and pepperoni slices on the top which look so tasty.

Australian Domino’s TikTok account posted a video sharing that recipe and captioned it “Y’all keep asking us for a low carb option 😏🍕Nah fr when we saw @elburritomonster make a watermelon pizza, we HAD to give it a go”. They also have given credit to the original creator Oliver Peterson.

In an interview with Fox News, he said that “I half expected it to cause a bit of controversy but didn’t expect it to go as far as it did”. Oliver also shared that he saw several people who have enjoyed that unique dish. He said, “It tastes sweet and smoky, with fatty salty richness from the cheese and chorizo”.

He also shared his inspiration behind making this dish. He watched a Netflix show called “Crazy Delicious” where a contestant won a challenge with their barbecue watermelon creation. Oliver said the judges really loved that recipe. So, I decided to recreate the dish. I made the watermelon as the pizza base.

Oliver also has expressed his feelings that so many people did not enjoy the dish while a lot of people loved the recipe and enjoyed it at home. He also mentioned getting “key details wrong” will make the dish bad. So, he then explained the exact way of making the dish so tasty. You have to cook the watermelon properly before adding the toppings to it.

He also added “It’s very vital to use BBQ sauce rather than marinara/tomato. BBQ is already a tried and tested flavor combination with watermelon. Tomato (I haven’t tried myself but would assume) simply does not work.”