Bigil aka Whistle in Telugu is a movie featuring Tamil Superstar Vijay on lead with Atlee. It is the third movie with the collaboration of these two. The movie was making huge hype, especially in Kerala and Tamilnadu. Now as the movie is released on October 25, it got leaked by Tamilrockers and is being spread all over the internet. Normally, according to the admin of the website he would not publish the movie by Vijay on the release date itself as respect for him.

The movie had its first-day first show as a special one before the normal shows, especially in Tamilnadu and Kerala. Most of the fans seem pretty impressed by the movie. The dialogue “Bigile…” is trending all over the internet and is being trolled and also celebrated by many in Tiktok and other social media sites. 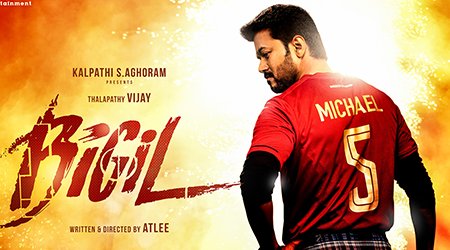 The movie has Nayantara in the female lead role. The movie was described as an average one by some of the critics. As the combo is Vijay and Atlee the expectations are also skyrocketing. When compared with the other two movies done by the collaboration, Theri and Mersal, this one is not up to the mark.

The second half succeeded to make the blood flow faster for the audience with the spirit of football, nationalism and hero hyping.

Yet the leaking of the movie all over the internet will make the makers of the movie bleed money from their income. The movie is expected to score high in Boxoffice and this leaks on the first week itself will surely affect the overall collections very badly. We strongly recommend you to watch the movie from the theatre itself.