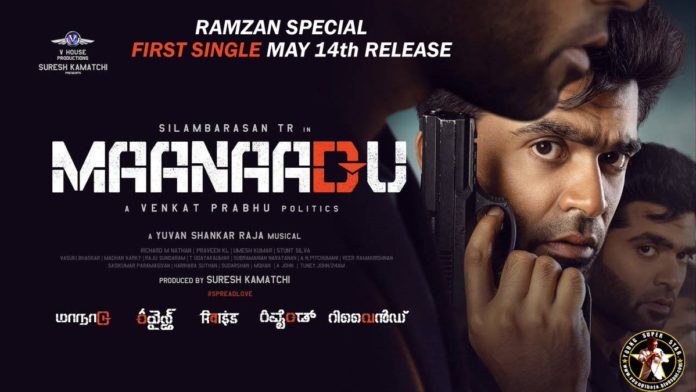 The fans and social media experts are continuously sharing the Political action thriller Maanaadu starring Silambarasan TR to release the first single on the special occasion of Ramzan on 14 May 2021. The film is about Abdul Khaaliq, a young Muslim played by the Silambarasan TR. Also, Silambarasan TR was working hard to finish shooting for the film.

Earlier, the film was destined for a theatrical release on the special occasion of Ramzan, but due to the recent surge in COVID-19 pandemic cases that has led to barriers in the filming procedure. Thus, the Silambarasan TR has pushed the same.

According to the sources, the crew and cast were to fly to the Maldives to shoot the film’s final part. Thus, the fans could expect the film to be out soon. The fans could witness the following stars in the film

Venkat Prabhu is the director of the film. Suresh Kamatchi is the producer of the film. The fans could witness Kalyani Priyadarshan playing opposite Silambarasan TR. The filmmaker turned actor SJ Suryah is the villain in the movie. Finally, the film has music by the famous Yuvan Shankar Raja.

The fans could expect the film in July now. The film is all set to release the first single on Ramzan on 14th May 2021.