The Marvel Cinematic Universe and Sherlock Alumnus Martin Freeman finally break his silence on whether Sherlock’s acclaimed series will return. Further, Martin also reveals if Sherlock will be back for a season 5 or as a film. Steven Moffat and Mark Gatiss recreated 19th-century fictional detective Sherlock Holmes by bringing him to the modern-day setting.

Benedict Cumberbatch portrayed the role of the consultant detective from 221B Baker Street. Freeman portrays the role of Dr. John Watson, Sherlock’s friend and close confidant. The series successfully spanned over four seasons alongside a holiday special episode. From the premiere of the first episode till the introduction of Urus Holmes and Blackbeard, the series has garnered a cult following and a massive fanbase across the world. Among several accolades, both Cumberbatch and Freeman have procured Emmys for their roles. The last season in the series, season 4, back in 2017; further, it garnered a mixed response from the audience globally. During that moment, it was pretty unclear if the series would feature more seasons as well as episodes. Truthfully the question regarding the future of the series is yet to be cleared. So, the real question is, Is Martin Freeman doing a favor after all these years? The answer would be yes! Irrespective of the last season’s response, the fans are still waiting to see Sherlock and Watson reunite once again.

Will Sherlock be back for more adventures?

Freeman has once again wooed the audience by delivering groundbreaking performances with Breeders, an FX original comedy. During an interview with Collider, Freeman touched on the possibility that there will be a movie to conclude the long-running mini-series based on Sir’s work. Arthur Conan Doyle.

Freeman further elaborates, there is a highly likely possibility that the series will be back but as a film. The cast didn’t exactly leave the series; instead, it is a long pause. Technically, it’s not a full stop yet. Moreover, it’s already been four years that a new series is out. So, things cannot be clear at the moment, but the future looks promising. 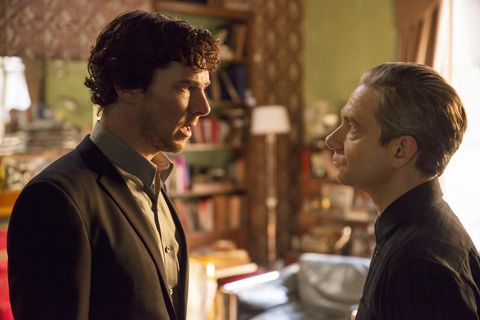 Earlier this week, Benedict Cumberbatch said that he could never tell a no to another season of Sherlock. Also, it was Cumberbatch who has raised the whole idea of bringing a film. However, the film is not going to be released any time soon. All the principal cast and crew are Sherlock is currently tied up with several other projects. So, if the movie is going to happen, then it would take a long time.

Cumberbatch and Freeman are significant characters in MCU, so they have a longtime commitment to the world’s most profitable franchise. Long story short, the entire idea of having a Sherlock film does have a little bit of merit over a season.

As far as the release date of the following film/season of Sherlock is concerned, it might be released sometime in 2021 or 2022. However, this is all a speculation nothing is concrete as of now.