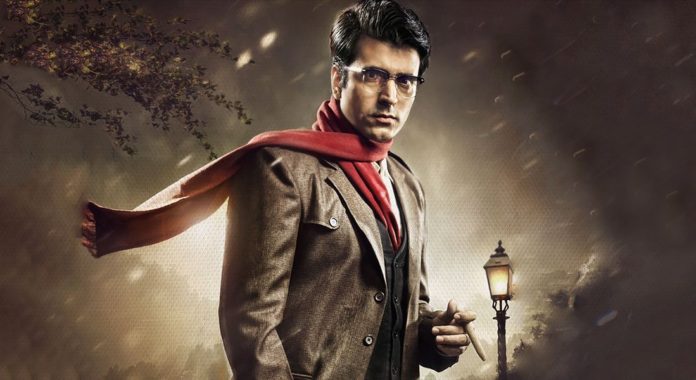 Byomkesh is hitting the theaters once again and this time the film will make Durga Pujo quite exciting and gripping. This version of Byomkesh has been created by Sharadindu Bandyopadhyay, people are going to see Byomkesh is Dhoti-Clad, a good detective. There is a rumor around the film which suggests that the audience has to re-schedule their Pujo itinerary for the film.

The story of Satyanweshi Byomkesh has been adapted from the acclaimed, Mango Mainak. In addition to this, the screenplay of the film has been drafted by none other than Anjan Dutt. By the looks of it, Dutt is singlehandedly responsible for re-creating and re-imagining the detective. The only question is that will too much goodness be disappointing?

The film focuses on a murder mystery; however, the film also has quite a streamlined central point, i.e., a political scenario. Moreover, the film is said to be quite dynamic as well as high-octane when compared with any other previous renditions.

The film has the classic touch of the old story, nevertheless, it is modern as well as fast-paced. The interpretations of the film are anew, the editing is different and the technicalities of the film are quite modern.

The most challenging part of curating Satyanweshi Byomkesh was that adapting the storyline of the 60s and 70s when Kolkata was in a tumultuous period. The film reflects the contemporary storytelling period which is different from the films directed by Satyajit Ray.

The new adaptation will showcase the traits of Bakshi that have never been seen or heard. Satyanweshi Byomkesh will unveil some of the unknown traits of the remarkable detective. In the trailer of the film, Ajit is heard saying that people are much interested to know about revenge stories, human relationships, and it is his job not to document these details.

The film takes place in the era of 1971 when there is an on-going liberation war in Bangladesh and the Naxal movement across the state and the country. The story is a clear winner and the untoward occurrences where Bakshi is hired by Manish Chakraborty for hunting down the culprit make the film the perfect thriller flick of 2019.

Well, our review of the movie ends here. Do let us know your opinion about the movie and our review in the comments section below. While you are down there, also let us know how much you would rate the movie. I hope you are happy with you your review. Follow our site for more updates.