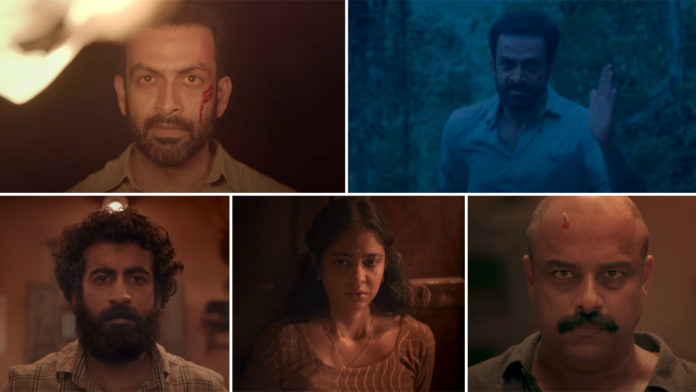 Kuruthi is an upcoming socio-political thriller film starring Prithviraj Sukumaran. It is reported that the film is gearing up for a theatrical release. Check the complete details in this post.

Kuruthi is Gearing Up for a Theatrical Release

Recently, the actor Prithviraj has shared a few pictures from the film set on his official social media pages. It hints that the movie is almost at its final wrap, i.e., the film is at the final stage of its production. And few sources also state that the film has finished the censor formalities and garnered a U/A certificate from the censor board.

Kuruthi movie will be released soon in theatres, according to close sources. The release date of the film is yet to be confirmed. Hopefully, the release date will be announced soon as fans are eagerly waiting for the film. Kuruthi teaser has doubled the fans’ excitement, and they are looking forward to more of it. Manu Warrier directs the Kuruthi movie, and this film will be his Malayalam debut. And, the film is written by Anish Pallyal. Supriya Menon produces this film under Prithviraj Productions.

Prithviraj Sukumaran is playing the lead role in Kuruthi. Murali Gopy, Roshan Mathew, Shine Tom Chacko, and Srindaa will be seen in supporting roles.  Akhilesh Mohan edits the film, and Abinandhan Ramanujam will take care of the cinematography.

Jakes Bejoy will be composing the original songs and background score for the film. Most people praised the teaser’s background score, and it is anticipated that Jakes is all set to create the magic with his music yet again.