Nayanthara’s Kolaiyuthir Kaalam is seen getting tangled with a lot of releases postponing over the last few weeks. The wait is finally over, after much struggle and delay, the movie has finally graced the film screens today.

The film has the lady superstar acting the role of a girl with a speech disability facing a dangerous murderer in a very spooky mansion where a lot of killings has been reported. The synopsis makes the audience wonder whether she would die in the hands of the murderer. 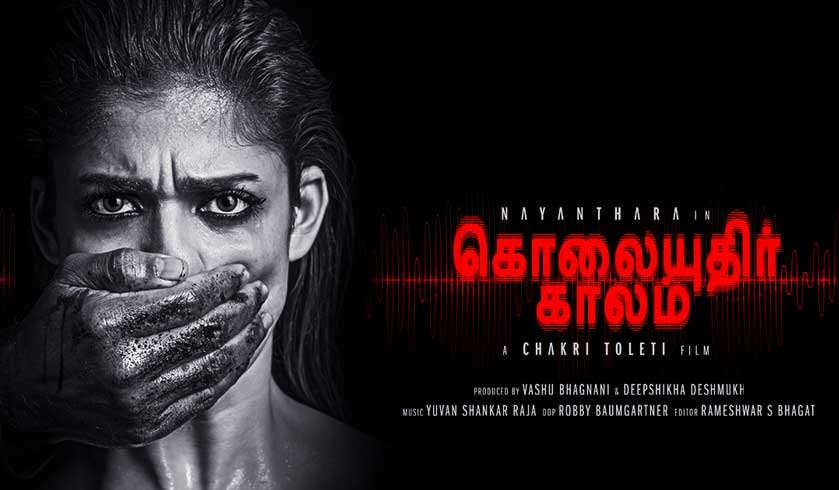 Directed by Chakri Toleti, the film is an official remake of 2016 American film, Hush. The film stars Nayanthara, Prathap Pothan, Bhoomika Chawla and Rohini Hattangadi. Corey Gayek has done the Cinematography while Rameshwar Bhagat is the Editor of the movie.

Here is the synopsis of this mystery thriller: ‘A young woman with a speech disability finds herself stranded in a mansion haunted by a series of gruesome killings. With the dangerous murderer still lurking in the shadows, will she be the next victim?’

All is looking well for the makers of the film. Though the film’s content looks rich and fresh, the film has gone through a lot of legal and distributing problems resulting in the delay of the release 7 times.

The advance bookings for the film are very poor which is something you will commonly hear for Nayanthara’s movie. These delays in the release of the movie have definitely effected it and the film’s content needs to extremely good for it to do well in the coming days. Did it have enough to revive itself? Here’s my review:

Kolaiyuthir Kaalam is one hell of a thriller. Though it is seen to be having a horror theme, the film thrills you more than it shocks. This is a perfect remake, if you have watched the original film, Hush, then you will know how well the director, Chakri Toleti made it.

Nayanthara did an outstanding job playing a woman with a speech disability. She holds the film throughout. There are few to no moments where you will feel that the film is not in control. The gripping screenplay and background score played a crucial role.

I have to say Kolaiyuthir Kaalam is a delayed delight. It might be late, but it didn’t fail to impress the audience. If you want to check out a movie this weekend, then definitely consider watching Kolaiyuthir Kaalam.