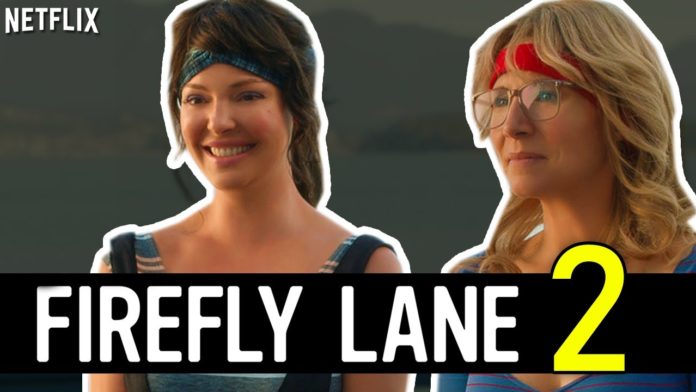 Firefly Lane is an American drama streaming television series on Netflix. The series was premiered on February 3, 2021, and is all about the journey of two teenage girls’ lives in the 1970s, all the way through their adulthood in the early 2000s. The show is the latest binge-worthy drama to hit the streaming platform.

Firefly Lane Star Sarah Chalke has responded to the possibility of the second season. Sarah Chalke, who plays Kate Mularkey in Kristin Hannah’s novel’s adaptation, insists she doesn’t know if “Firefly Lane” is getting a second season. When asked about the chances of a second season, Sarah replies, ”We don’t know anything. My fingers, my toes, and everything are so crossed. She furthers says that she is very hopeful about it. Sarah Chalke opens up about her experience working on this project to IMDb’s Movies That Changed My Life podcast. “It was kind of rare, unique, and enjoyable experience to get to play somebody in those different decades.” Sarah Chalke further said, ”I just fell in love with the part, in love with the concept. I loved the idea that it was going to be this show centered around this really
a solid female friendship which we so rarely see portrayed.”

The premiere of a second season is not yet officially announced. Katherine Heigl couldn’t confirm the possibility of a second season. The creator of the series Maggie, made no revelations about a second series. The viewers are indeed waiting for a serious answer from the crew members of the show.

Netflix has yet to confirm a Firefly Lane season 2. The show has only covered the first half of Kristin’s book. There is a lot more content to show, which can bring life onto the screen. The viewers are eagerly waiting for the second sequel as they couldn’t get enough of the new drama. Firefly Lane was the best thing to happen during this summer.