Chhapaak is an Indian Hindi-language drama genre film starring Deepika Padukone, Vikrant Massey, Ankit Bisht in leading roles. The film was directed and produced by Megha Gulzar along with Deepika Padukone under the banner Fox Productions.

This film is based on the life of Laxmi Agarwal, Deepika plays the role of her, an acid attack survivor along with Vikrant Massey. The music of this film was composed by Shankar-Ehsaan-Loy, the cinematography was done by Malay Prakash and got edited by Nitin Baid. 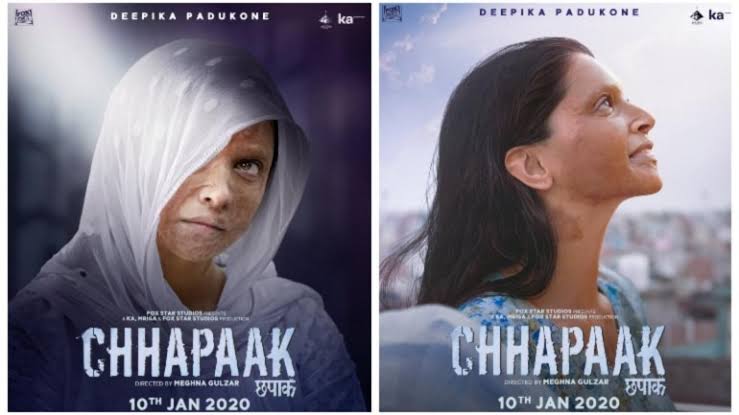 This film is scheduled to release on 10th January 2020. This film will clash with Ajay Devgn’s Tanhaji which will release on the same day. Deepika Padukone announced this film on 24th December 2018 from her twitter account.

The official trailer of this film was released on 10th December 2018. Also, Deepika Padukone got teared up during the trailer launch as the emotional toll got out. The trailer received a positive and shocking response with around 43 Million views and also 1.5 Million likes.

Deepika Padukone said that she could not do Chhapaak if Meghna Gulzar was not the director. She also said that the film is made to break all the stereotypes and She can’t compare this film to any other film that she has done before. The director of the film said that making Chhapaak with Deepika was a lucky chance.

Vikrant Massey, who played the role of Deepika’s partner said that people have to understand the determination, strength which people will have an audience should also know what exactly Laxmi went through.

Deepika Padukone was seen supporting the protest at JNU for CAA on 07th January 2020. Later, two hashtags #BoycottChhapaak and #BoycottDeepika began trending in Indian Twitter by the members of the Bharatiya Janata Party. Also, #ISupportDeepika was started too along with the other two.

After playing powerful characters in Padmaavat (2018), Piku (2015), Yeh Jawaani Hai Deewani (2013) and many more, Deepika was again back with Chhapaak which is also a powerful role in her career.

“Playing her most challenging role so far, @deepikapadukone breathes life into every frame. She makes us believe we’re watching the travails of a normal girl.”

#Chhapaak Review
Rating: ⭐️⭐️⭐️½
A hard-hitting tale of a horrendously ignored crime.
It takes guts for a superstar actress like #DeepikaPadukone to be part of such a path-breaking film – RJ @DIVYASOLGAMA@deepikapadukone @meghnagulzar @Thelaxmiagarwal @foxstarhindi pic.twitter.com/Kq84UQzciU