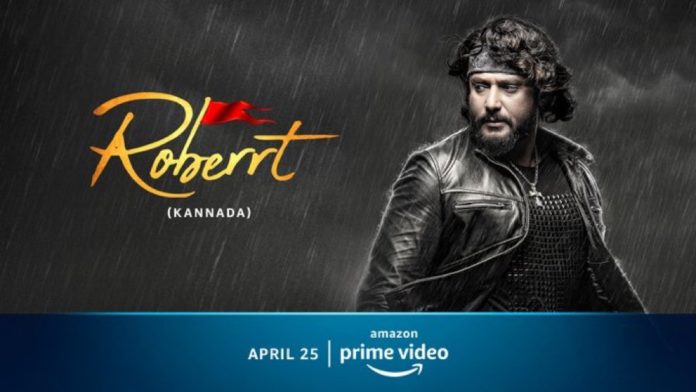 Following a massive success on the big screen, Roberrt, featuring Darshan and Jagapathi Babu, is now launched on one of the largest OTT platforms, Amazon Prime. The film drew an overwhelming amount of positive feedback from fans and critics alike.

Roberrt hit the big screens on March 11 this year, clashing with the release date of Shivaratri. It quickly made its way to the 50 crore club, being one the first movies to enter that rank so fast and breaking its box office records on its way. It had a tremendous theatrical run for 40 days, but that was cut short due to the new restrictions to control the second wave of Covid-19. And these restrictions included shutting down the movie theatres for the time being. They have remained closed for the past ten days straight. This called for what future action the film’s management board should take. And the natural answer was to bring the release date on the OTT platforms closer. Subsequently, Amazon Prime gained the rights of the movie’s digital streaming and fixed upon a date for the film’s release. And the date is April 25. Yes, we are only four days away from being able to stream this blockbuster on our small screens. Great news for the fans indeed!

A general Overview of the Film

As is evident from the hype and commercial success of the film, it is no surprise that Roberrt is a trending topic on social media. But what is the film all about?

Director Tharun Sudhir has described the film as a straight-out action-drama film with an immersive and exciting plot that will keep the audience on the edge of their seats. Along with that, the lead star, Darshan himself, has said that along with the plot, the main character’s design is also something to look for as he goes through a transition throughout the entire film.