Chhapaak starring Deepika Padukone was released on January 10th, 2020. Here is the first-day collection for Chhapaak. Chhapaak may earn up to 4.66 Cr on its first day. According to reports, the film got Ajay Devgn’s Tanhaji in competition for collections at the box-office.

The film is expected to collect 50-70 Cr in its first weekend. Also, another plus point for the film unit is there’s a festival(Pongal) incoming which can also help for better collections. So, this film can run successfully in its first week. 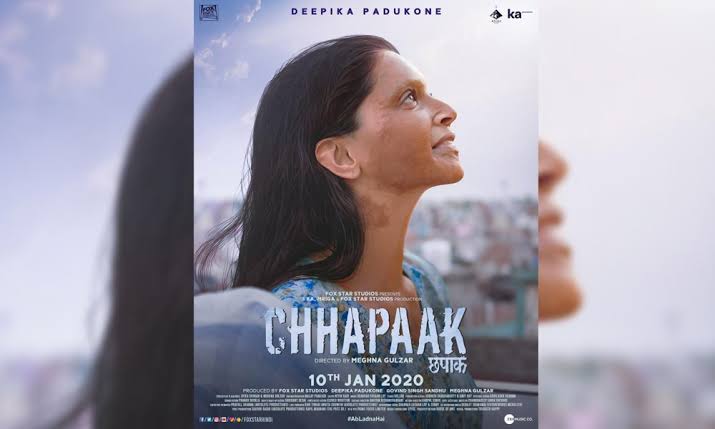 According to reports, Chhapaak was opened with positive talk and got a good vibe as celebrities supported this film on twitter. According to a survey, Chhapaak has become one of the greatest performances of Deepika’s career.

Deepika Padukone announced this film on 24th December 2018 from her twitter account. Also,  Vikrant Massey said that people have to understand the determination, strength which people will have an audience should also know what exactly Laxmi went through.

Deepika Padukone is yet again back with another strong character after powerful roles in some films like Padmaavat (2018), Piku (2015), Yeh Jawaani Hai Deewani (2013) and many more.

Chhapaak is based on true incidents,  life of Laxmi Agarwal, an acid attack survivor, whose character is played by Deepika Padukone in the film along with Vikrant Massey who’ll be seen as Deepika’s partner.

Deepika Padukone was seen supporting the protest at JNU for CAA on 07th January 2020. Later, two hashtags #BoycottChhapaak and #BoycottDeepika began trending in Indian Twitter. Also, #ISupportDeepika was started too along with the other two. Do these affect the collections? let the audience decide!