In this article, we are going to discuss how each nominated contestant has performed this week. We will also take what the audience is saying on social media into consideration. And based on that, we will let you know who is doing well and who is not.

The nominated contestants are Tamanna, Punarnavi, Rahul, Vithika and Baba Bhaskar. We are writing this article right before the weekend, that means we got to see five episodes from the day these contestants are nominated. So here is our take and the audience’s take on how the housemates have performed. Below are the opinions of the writer and audience in general. Do let us know your opinion on how the nominated contestants have performed by writing in the comments section below.

Apart from the house, Baba Bhaskar also has a huge number of supporters from outside. Social media is filled with positive tweets and posts about him. So there is no way that Baba Bhaskar is going to leave the house anytime soon.

Most of the audience didn’t like the way Punarnavi has classified the people in the house. She is seen commenting on their personal lives and social backgrounds. On the other side, she also got a lot of supporters for the way he’s been playing.

Though Rahul is seen getting into fights with Sreemukhi, Rahul is doing well in the house. Most of the times, he is seen taking a stand on different issues. He gave his opinion on every issue that has happened in the house and the audience is quite ok with the way he is performing.

Tamanna is definitely the one that is leaving the house this Sunday. No percentage of the audience is happy with her. She got into a fight with Ravi Prakash because he nominated her for elimination. She literally bullied him for nominating.

Not only, Ravi Prakash, but she also had a verbal war with almost everyone in the house. The audience is also not happy with her behavior and they think she shouldn’t have been brought into the house.

Vithika should thank Tamanna for gaining more negativity than her in the few days she has been in the house. If Tamanna didn’t enter the house, Vithika should’ve been eliminated this week for sure.

As we all know she got into a fight with Mahesh Vitta in the initial days of the season. And recently she is seen creating drama against Sreemukhi who planned to break the glass in a task. The audience has never been on her side since the start.

Save Your Favourite Contestant By Voting Them 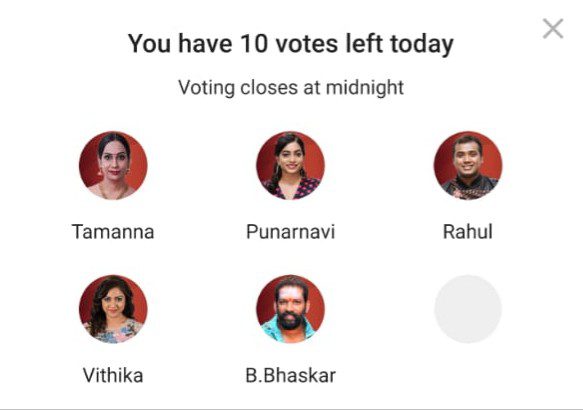 Voting by giving a missed call