Bigg Boss 3 Tamil Vote online: Who are nominated for this weeks elimination ?

Bigg Boss Tamil Vote: The week has been a significant milestone for the remaining contestants in Bigg Boss Tamil 3 as they have successfully survived around 78 days in a week. By the looks of it, the show is bringing much more sensational twists in the forthcoming days.

So far, the first-ever wild card entry of the show, Kasthuri Shankar has been eliminated. On the other hand, there was the re-entry of the disruptive contestant of Bigg Boss Tamil season 3, Vanitha Vijayakumar; this is changing the dynamics of the show. Cheran, Kashthuri, Abirami, Madhumita, Sakshi, Reshma, Mohan Vaidya, Meera, Vanitha, and Fathima Babu have been eliminated from the show. Cheran is still in the game; however, he was moved to a secret room.

The nomination of this week was a little different, Bigg Boss said that the contestants have to go through closed-door nominations. The contestants secretly voted in the confession room and were strictly told not to discuss the nominations with anyone. 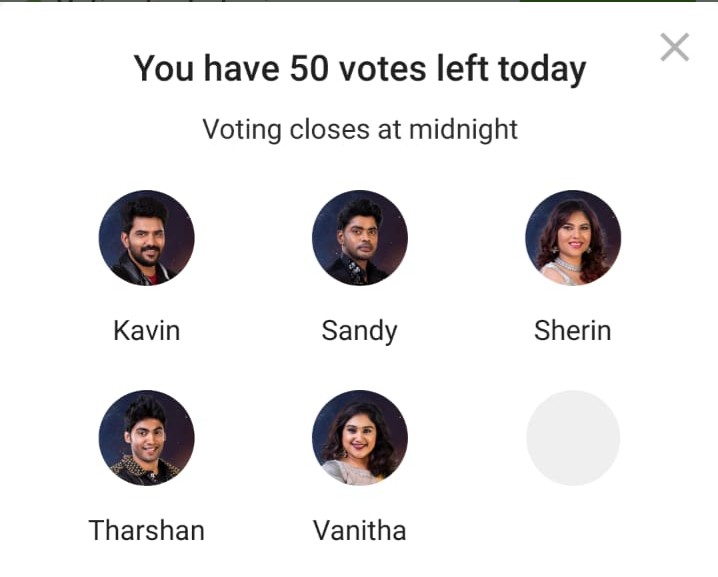 After the voting process ended, the contestants who are up for nomination are Tharshan, Sherin, Sandy, Vanitha, Kavin. Losliya is the captain of the house this week, yet she had a chance of being nominated. Moreover, Losliya and Mugen are safe as they did not receive any votes.

Vanitha, Shrein, Tharshan and Sandy have received six, four, two and two votes. However, Kavin was nominated due to poor performance in this week’s luxury budget task.

Who Nominated whom during the nomination?

The nomination suggests that the housemates of Big Boss Tamil 3 want Vanitha to leave and that is why everybody has voted against her. So, the real question is who nominated whom?