Bigg Boss Tamil Vote online: So as you all know, Cheran, Kavin, Losliya, Mugen and Sherin are nominated for eliminations this week. Among these, who are in danger zone and who will be leaving the house this Sunday? Read the article completely to know.

Right now, the Bigg Boss house in high on the controversy. There are a lot of negative vibes among the housemates and contestants are seen blaming each other and getting into a war of words. In this mess, who’s side are the viewers taking?

Looking at the talk of the audience, it seems like Cheran and Shrein are in danger zone this week. One of these two contestants will have to leave the house. Even the vote count suggests the same. Check the vote count below.

So as you can see, Shrein and Cheran are the ones with least votes. In fact, Shrein’s vote count is much less than that of Cheran. So if the voting goes like this, Sherin will be leaving the house.

And just like every week, Kavin is riding high on the vote count. He is seen having a huge following among the audience. Along with this, #SaveKavin was trending on Twitter on Monday. This clearly says that Kavin is safe this week.

However, this is just the vote count of the first day (Monday) after the candidates are nominated. As you know, anything can change in a week’s time in Bigg Boss. The actions and words of the candidates will influence the audience mind.

Who will be eliminated and who will be saved will all depend on your voting. So here’s is how to vote for your favourite contestant through Hotstar and through missed call.

So as mentioned above, Cheran, Kavin, Losliya, Mugen and Sherin are nominated for elimination this week in Bigg Boss Tamil. 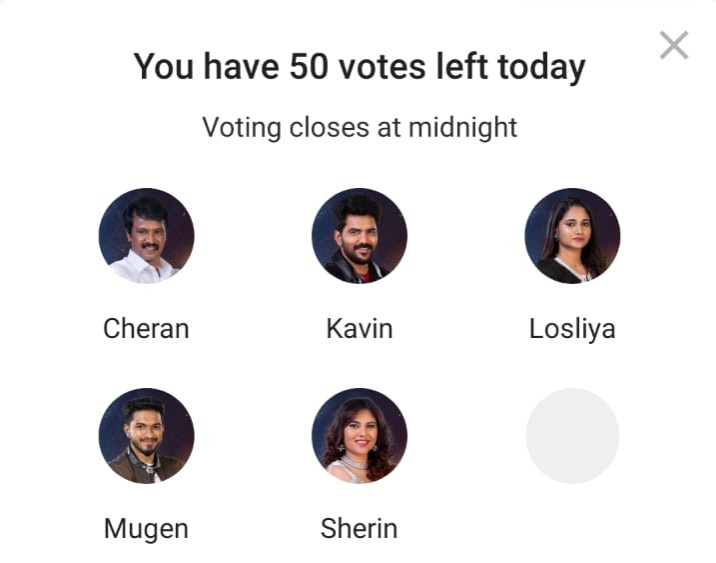