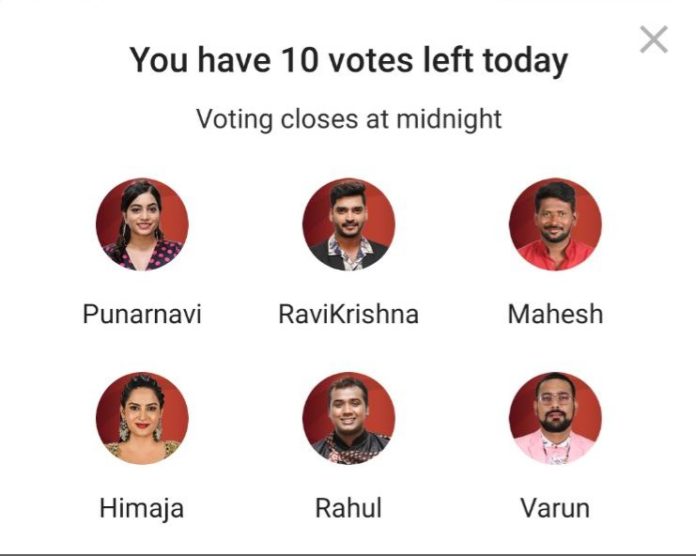 On Sunday, Ashu Reddy was eliminated from the house. And today, new contestants have been nominated for this week’s nomination. As you every Monday is for nominating contestants for elimination and today Punarnavi, Ravi, Mahesh, Himaja, Rahul and Varun got nominated.

Today, to nominate contestants for this week’s elimination. The contestants were asked to participate in a task. In this task, first, they have to pair up as teams. Baba Bhaskar and Mahesh. Rahul and Vithika. Varun and Punarnavi. Sreemukhi and Himaja. Ali and Ravi. These are the pairs that are formed.

And in the task, the pair was asked to hold two ropes each of the bucket full of mud. And each contestant in the house should vote to one whom they want to eliminate. And after all the contestants voted, the person with the lowest votes will release the rope and the mud and water will fall on the person who gets most votes.

In this process, Punarnavi, Ravi, Mahesh, Himaja, Rahul got nominated. And the captain of the house, Shiva Jyothi nominated Varun.

So as mentioned above, Punarnavi, Ravi, Mahesh, Himaja, Rahul and Varun are nominated for elimination in week 5 of Bigg Boss Telugu 3.