During the nomination process, the contestants voted for two housemates each whom they want to nominate for elimination. In this process, Abhirami got seven votes. Sakshi got five votes. Losliya got four and Saravanan got three votes.

However, Only three contestants, Abhirami, Sakshi and Losliya were declared nominated for this week’s elimination. Though Saravanan got saved here, he got eliminated by immediate effect later for confessing that he used to grope women in his college days.

Who Among Abhirami, Sakshi and Losliya Will Get Eliminated?

As they are nominated, Abhirami, Sakshi and Losliya will face the elimination battle this week. So in these three women, Sakshi has been facing a lot of flack from the audience of the show. If you follow social media, it is evident that there is a lot of negativity around Sakshi, who is seen getting into fights and verbal battles over the last few weeks.

It was predicted that Sakshi will get eliminated last week. But to everyone’s surprise, Reshma got eliminated. So this week, it’s pretty much clear that Sakshi might be one to leave the house.

Though, She is not the only one who is facing the negativity. Housemates have nominated Abhirami for elimination with the highest of 7 votes. This means the audience will also consider not voting for her if their favorite contestant has voted for her.

However, the sure thing is that Losliya will not be eliminated this week. She is seen getting support from the netizens and common audience. So it will be either Abhirami or Sakshi. Our prediction is Sakshi. Let’s see what happens. Do let us know your prediction on who will get eliminated in the comments section below.

Is your favorite contestant nominated? Do you want to vote for them to save them from elimination? Follow the below instructions to do so. 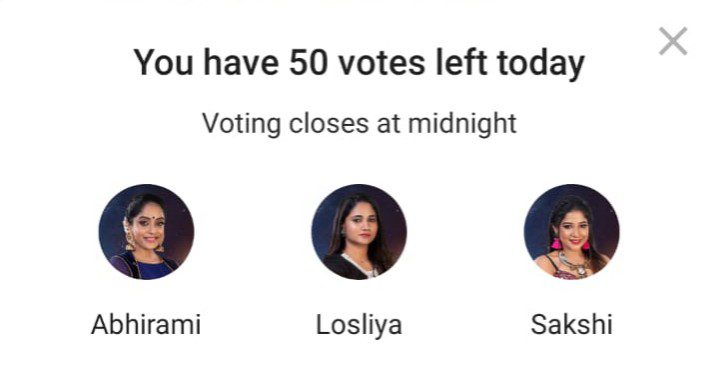