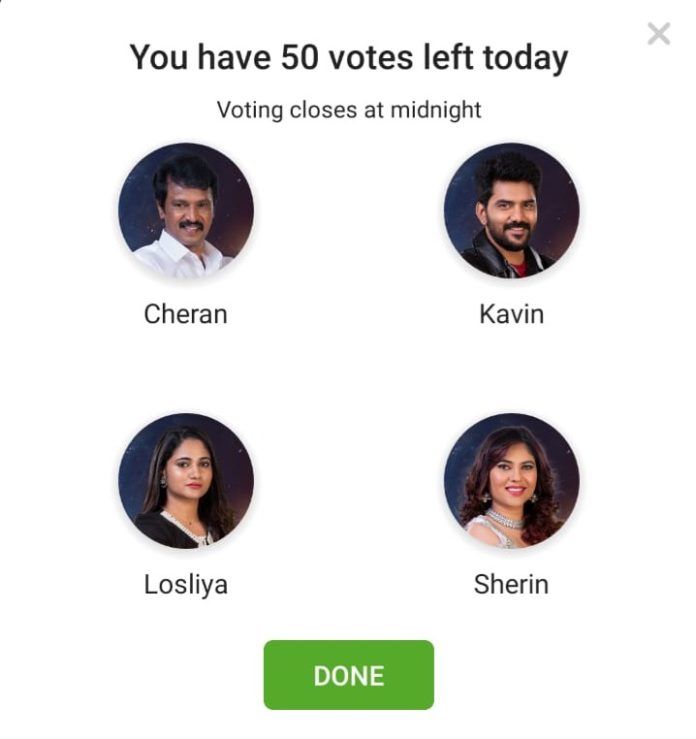 Big Boss Tamil 3 is the third ongoing season is the reality show Big Boss. The first episode of season 3 of Big Boss Tamil aired on 23 June 2019 on channel Star Vijay. The show has 17 contestants and is hosted by Kamal Hassan.

This week this season has aired it’s 86 episode, and this week seems to be intense for the fans. Upcoming days will declare the contestants who will hold the ticket to finale. Last week we had elimination of Sanvitha, the week proved to be emotional for the fans.

Fathima Babu, Vanitha, Meera, Mohan Vaidya, Reshma, Sakshi, Madhumita, Abirami and Kasthuri are eliminated so far. Cheran was lucky enough to get the secret room opportunity and is back in the house.

Nomination for this week are Cheran, Sherin, Kavin and Losliya. Below are the total number of votes nominees were able to collect for day 2.

From the votes count we can see Sherin is trailing. Will it be the last day for her?

This week it’s Losliya Vs Sherin, and it’s a tough competition between both because of Losliya’s fan base.

Last week it was Sherin vs Vanitha, and Vanitha received less votes because of her negative image.

This week’s vote will also count for the finale.

It is to be seen that will Sherin be able to make it this week or will be eliminated?