‘Aranya’ is a trilingual movie that is long-delayed and is finally going to be released simultaneously in three languages i.e, in Tamil named ‘Kadan’, ‘Aranya’ in Telugu, and ‘Haathi Mere Saathi’ in Hindi. The movie is going to be on screens worldwide on April 2, 2020.

The poster of ‘Aranya’ released today, is very well depicting a fearless image of Rana Daggubati who is ready to do anything possible to protect the forest and its animals. 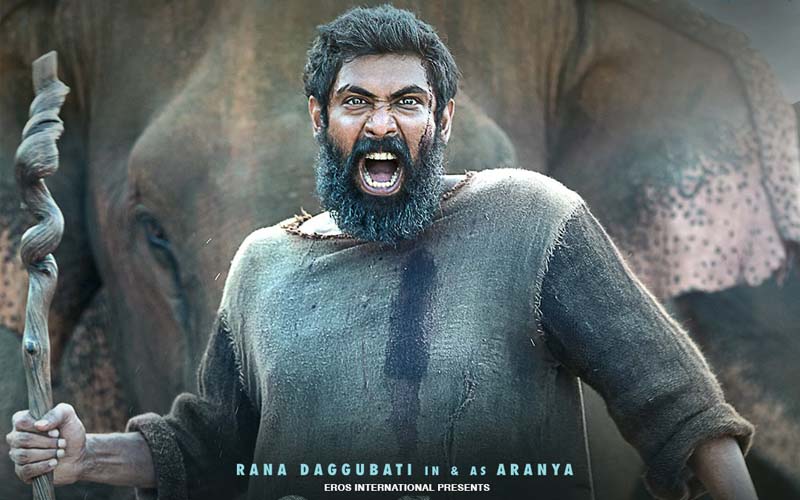 The movie, ‘Aranya’ is written as well as directed by Prabhu Solomon and is produced by Eros International. The main lead roles in this movie are going to be played by Rana Daggubati, Zoya Hussain and Shriya Pilgaonkar. Shantanu Moitra has seen the music of ‘Aranya’ and the sound design was managed by Resul Pookutty.

It was announced by Rana Daggubati on social media that the movie has wrapped up and that he has started dubbing in all three languages. The actors have also started to promote the movie on various social media platforms.

This movie is one of the most expensive movies in Rana Daggubati’s career. It is shot in thick forests of Sri Lanka, Kerela, and Thailand. ‘Aranya’ is believed to be a tribute to Rajesh Khanna’s movie ‘Haathi Mere Saathi’ but is expected to have a fresh storyline and not to be just a remake of the classic. The only similarity between the two movies will be the love and shared bond between elephants and human beings.