Banerjee and French-American Duflo both work at the prestigious Massachusetts Institute of Technology while Kremer is at Harvard University. Duflo is the second woman and the youngest ever to win the economics prize.

The prize includes 9 million-kronor (USD 918,000) cash, a gold medal and a diploma. The winners will equally share the prize money.

“The research conducted by this year’s Laureates has considerably improved our ability to fight global poverty. In just two decades, their new experiment-based approach has transformed development economics, which is now a flourishing field of research,” the Royal Swedish Academy of Sciences said.

They have introduced a new approach to obtaining reliable answers about the best ways to fight global poverty, it added. 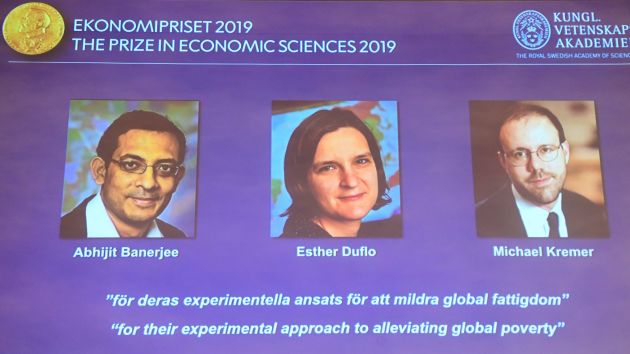 Their “research findings – and those of the researchers following in their footsteps – have dramatically improved our ability to fight poverty in practice,” it said.

As a direct result of one of their studies, more than five million Indian children have benefitted from effective programmes of remedial tutoring in schools. Another example is the heavy subsidies for preventive healthcare that have been introduced in many countries, it added.

“Showing that it is possible for a woman to succeed and be recognised for success I hope is going to inspire many, many other women to continue working and many other men to give them the respect they deserve,” Duflo said at a press conference soon after the announcement.

Banerjee, 58, was educated at the University of Calcutta, Jawaharlal Nehru University and Harvard University, where he received his Ph.D in 1988.

He is currently the Ford Foundation International Professor of Economics at the Massachusetts Institute of Technology, according to his profile on the MIT website.

In 2003, Banerjee founded the Abdul Latif Jameel Poverty Action Lab (J-PAL), along with Duflo and Sendhil Mullainathan, and he remains one of the lab’s directors.

He also served on the UN Secretary-General’s High-level Panel of Eminent Persons on the Post-2015 Development Agenda.

With Banerjee, she wrote Poor Economics: A Radical Rethinking of the Way to Fight Global Poverty, which won the Financial Times and Goldman Sachs Business Book of the Year Award in 2011 and has been translated into more than 17 languages.

She has worked on health, education, financial inclusion, environment and governance. Her first degrees were in history and economics from Ecole Normale Superieure, Paris. She subsequently received a Ph.D. in Economics from MIT in 1999.

She is the Editor of the American Economic Review, a member of the National Academy of Sciences and a Corresponding Fellow of the British Academy.

Kremer, 54, is a development economist, who is currently the Gates Professor of Developing Societies at Harvard University.